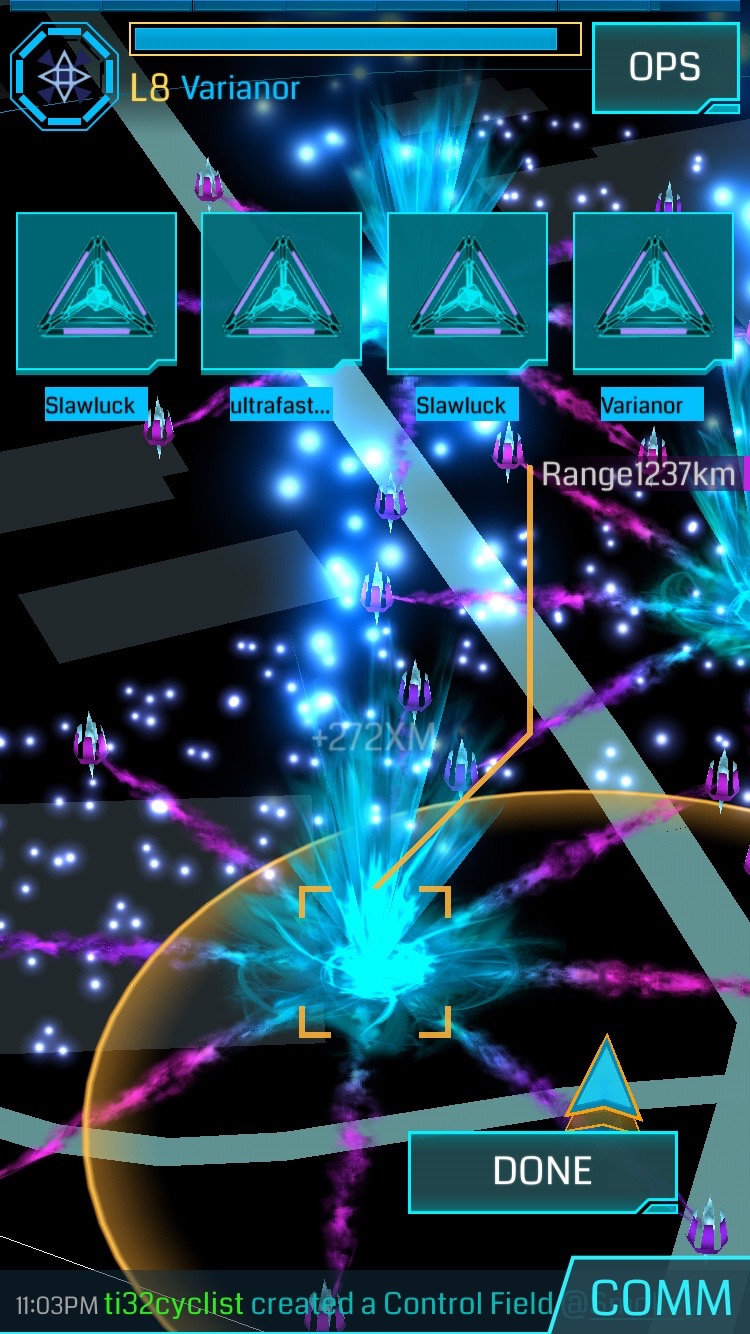 This is Ingress. Fall into the scanner, find a world beside our own, seek it out, conquer it and reconquer it. Again and again. Embrace it. Sci-Fi Capture The Flag Everyone!

Got it. Wait. I have all that! Frick I have no time. Okay. Lead on.

And a fully charged smartphone.

What are we taking down?

Twenty and two level 8 Portals. Owned by the Enlightened. The other faction.

Looking for Field Anchors for a brilliant plan that doesn’t come to pass. My Scanner displays partial information. I go adrift. (Can’t see the augmented reality for a while.) There are police cars, cones and blockers. Huh. In Bristol CT even. Oh construction! I do not find what I need. I do score points toward badges with the portals that I Hack. Boy am I happy that I know these roads otherwise I’d be late.

Who arrives to a strike team meet with plans? This guy. Who needs them? Nobody. (They were beautiful. And they helped me find my way around.)

What’s a 50 year old parent doing out 25 minutes from home at 9:30 on a school night? Attacking things! In the middle of a town that I know. Dark shadows rule. Hidden parking spots are easy to find. The meet-up is well lit. Funny. Excitement abounds. Oh my yes. Two top level agents. They have stuff for me. I have a tiny folder with ideas. We head out. This is, as the Senior Agent observes, easy with 3 of us.

We walk. We hack. We -ahem- deploy XMP bursters. Again and again. Beautiful glass shattering sounds erupt from my phone as portals start to fall. And fall. And we deploy.

Oh yes. Each portal gets a link amp. Four in fact. One from each of us plus one. (A portal can only hold four mods.)

Wish I could tell you.

Things fall. Portals that is. They get rebuilt with Link Amps.

Scene Three: They are On To Us?

South of the beginning. And a little more than west. The rampage has been glorious. We’ve blown down about 11 enemy faction portals. More must fall. Down they must go in a flare of red energy!

“Hey someone just took back a portal.”

“Are you deploying mods?”

“Everyone got enough link amps?”

Message from the other side on COMM: “LMAO! Run out of link amps?”

Scene Four: A Farm No More

“Down the way. That’s the Jarvis Root house.”

“What does it have?”

“Okay back toward the center of town there’s only a couple.”

Moi (not quite getting it): “I knew it. All that damage took out a linked portal.” (I’m paying attention to other things within the game.)

Moi (still not getting it): “There’s one more left. The pizza place. And technically two more at J. Tim’s beyond that.”

We killed it. The last portal. Plus two more.

And then we went for a beer.

More fun than I knew you could have outside the house on a Thursday night in summer.

(For anyone curious, I still have the maps I made. In a folder. A plum colored folder. I called it “Operation Plum Crazy” because I didn’t see how we could do this in one night.)

*Now we’re deep into the game. If you’re still reading, and you don’t already play, you’ll need to know a few terms. Is there an Ingress dictionary? Well not that I found in a quick search, but Urban Dictionary has an entry: http://www.urbandictionary.com/define.php?term=Ingress So. Terms I’ll Define Later – e.g. right below – will handle this.

Capture: You ‘Deploy’ ‘Resonators’ to take control of a ‘Portal’. It gives you better stuff once you do this.

Defend: When someone attacks a ‘Portal’ that you have the ‘Key’ to, you can ‘Recharge’ it. If you’re near it you can even drop new ‘Resonators’ on it.

Deploy: Strike a key on your smart phone. Put a neat looking ‘Resonator’ on a ‘Portal’.

Enlightened: One of two factions in the game.

Field: A big, colorful smackdown across a slice of the globe that thrills your team-mates or frustrates the other faction. Comes in blue or green currently.

Field Anchors: Well situated ‘Portals’ (or ones that you have a Key to) that you can throw a ‘Link’, then use to set up a ‘Field’.

Glyph Hack: A way to ‘Hack’ that is a game within the game. It gives you bonus stuff!

Link: After you ‘Capture’ a ‘Portal’, you can throw what’s called a Link, a sizzling bright line, to another ‘Portal’ that’s also your faction’s color. You must have a ‘Key’. These can be a pain to get. More than one of.

Mod: Once you have at least one ‘Resonator’ on a ‘Portal’, you can stick cool things on it. Up to two for you. Two more for friends and family.

Resistance: One of two factions in the game.

Resonator(s): Spiffy spiral things that help control the energy coming out of a ‘Portal’ and help defend it when it’s under attack.

XM: Portal juice. In the game it’s called Exotic Matter. It’s everywhere there are cell phones and wi-fi. And ‘Portals’.

Thank you for reading to the bottom. A ‘Farm’ is an important thing in the game.

Farm(s): A set of high level ‘Portals’ close together where agents can quickly and easily ‘Hack’ to obtain gear. More advance agents ‘Glyph Hack’ to obtain extra gear. The other faction usually runs out and smacks them down frequently. I hit Krako. Krako hits Tepo. Tepo hits me.